Small and medium units, which play an important role in the state's economy, are expecting big announcements as the Union Budget approaches.

After facing many difficulties in the Corona era, thousands of Vapi industries are sitting on the first budget of the central government ... In this budget, Vapi industries are demanding improvement in the slab of GST. At the same time, the package has been announced by the government for small and medium enterprises. Similarly, this time the budget has also demanded more relief to small and medium enterprises. 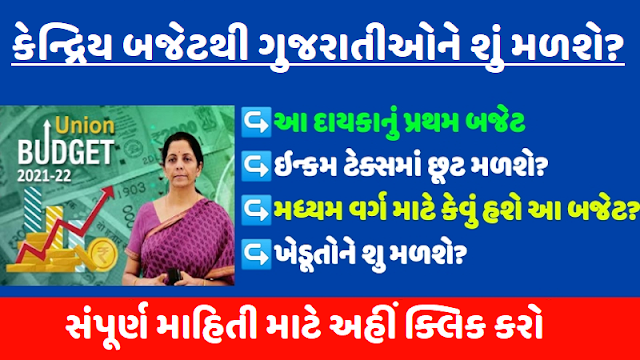 The textile industry, which is the largest employer in the state after agriculture and construction, expects a big relief in the central budget under the theme of Self-Reliant India. Gujarat has a strong position in ginning, spinning, weaving and textile processing and cannot compete with countries like Bangladesh in terms of readymade garments. If the government imposes duty on garment imports from Bangladesh, the industry in the state will grow faster. Also, if the government announces tax relief for the common man, it will increase the purchasing power of the people and increase the sales of textiles, say industry leaders.Senior citizens will benefitFinance Minister Nirmala Sitharaman came up with a new tax system last year. However very few people have chosen this option. The reason is, there is no discount in NPS except 50,000. The rules may be changed to make the new tax system more attractive. To provide relief to the people, it may include tax exemption on Provident Fund (PF) and Leave Travel Concession i.e. LTC.
Hopes for tax relief in the budgetThe Corona epidemic has had a devastating effect on the salaried class. Tax experts believe that the government should increase the investment limit to 80 (c) to increase the savings of the salaried class. In addition, those with an income of more than Rs 5 lakh should benefit from the implementation of the new tax regime to change the 20 per cent tax slab. Tax experts are demanding that professionals or individual taxpayers should be covered at 22 per cent, just like corporate companies.GCCI's expectation regarding the central budgetGCCI is expecting big announcements. GCCI should give the benefit of 22 per cent tax structure to partnership companies and LLPs as well as corporate companies. It is also being demanded that important schemes for infrastructure development and easy banking finance be made available for MSME companies. Has been demanded
IMPORTANT LINKS :
👉Aajtak Live : Click Here
👉ABP Asmita Live : Click HereHope small entrepreneurs take the budgetThe Federation of Industries Associations, which represents about 2.50 lakh industries in the state, has demanded that the government come up with a scheme for easy finance when bank finance is a major problem for MSME units. MSMEs are also demanding that the government provide a subsidy for the acquisition of such technology at a time when international technology is needed to manufacture world-class products in India under the Self-Reliant India Campaign.
Tags: Budget News
Newer Post Older Post Home
WhatsApp Free Join Broadcast List