In the meeting of Gandhinagar cabinet, Chief Minister Rupani gave instructions to Transport Minister Faldu and Minister of State for Home Affairs Pradipsinh.
State government's decision to prevent congestion in RTO, vehicle detention for violation of traffic rules
government has taken a major decision to provide temporary relief to motorists in the state. From now on, police across the state will not levy any fines on motorists other than wearing masks. No fines will be levied by the police for violating other traffic rules. In a cabinet meeting held at Gandhinagar today, Chief Minister Vijay Rupani has instructed State Transport Minister RC Faldu and Home Minister Pradipsinh Jadeja in this regard.
Vehicles of traffic violators will not be detained. Chief Minister Rupani had taken this decision in a cabinet meeting to prevent congestion in the RTO in view of the current situation in Corona. Vehicles are detained by the traffic police for violating the rules, leading to huge crowds at RTO offices across the state. This also increases the risk of coronary heart disease. The decision has been taken keeping in view the fact that it is the priority of the state government not to gather crowds at any place at present.
Representation on the plight of two-wheeler detainees
Two-wheeler and four-wheeler drivers are detained by the traffic police for violating traffic rules in the state. Drivers are fined between Rs 2,000 and Rs 8,000 on these detained vehicles. In addition, there is an increase in the number of drivers rushing to the RTO office to release detained vehicles. This led to widespread representations to the state government that there was a fear of a massive Koro transition. This decision is believed to have been taken following this. 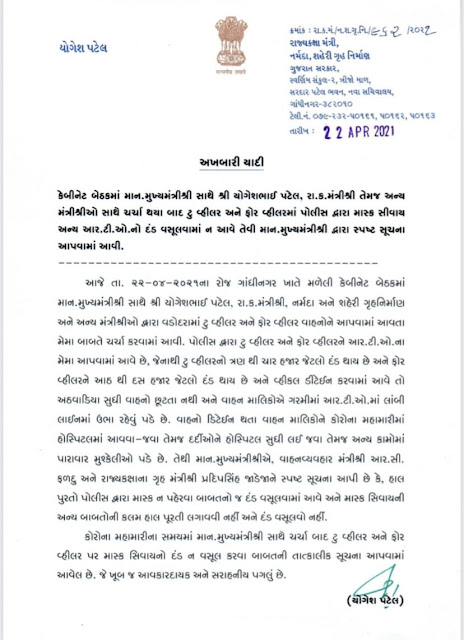 Twenty-five employees of the Ahmedabad RTO office were coroned together
Yet last week on April 16, 25 employees of the Ahmedabad Subhash Bridge RTO office were horrified when they were coroned together. Positive cases were also found in the Vastral RTO office. In which the employees including the inspector, assistant inspector, clerk have come to the rescue of Corona. A large number of applicants come to the RTO office every day, hence the fear of spreading the transition. After this, all the operations in the RTO office were done online.
Read In Gujarati : Click Here
Penalty of Rs.1000 per person for breaking the mask will continue
However, the Chief Minister clarified in the meeting that whether it is a two-wheeler or a four-wheeler, in addition to the driver sitting in it, if the co-driver is not wearing a mask, Rs. A fine of Rs.1000 will continue to be levied. The traffic police will also continue to collect fines without masks. However, the CM said that the purpose behind this was not to replenish the exchequer but to curb the transition of corona by increasing awareness towards masks.
Tags: News
Newer Post Older Post Home
WhatsApp Free Join Broadcast List