Home Education / News / First-year classes at the college will begin on February 8.

First-year classes at the college will begin on February 8.

First-year classes at the college will begin on February 8. 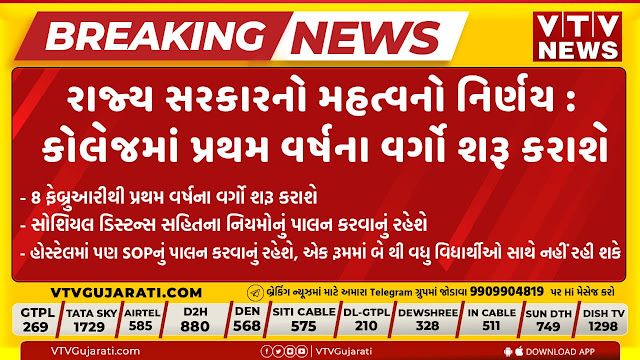 Rules including social distance have to be followed.
Hostels will also have to comply with the SOP. Can't stay with more than two students in one hostel room.
Guidelines were issued from time to time for the academic functions of the Survey Universities / Colleges under the Department of Education and in the interest of the students in the situation arising out of the outbreak of Novel Corona virus in the State. From the letter mentioned in cum (1) read out among the above instructions, guidelines were issued by the education department for re-opening of universities / colleges, under which in the first phase all P.G. Ph.D. , M.Phil. , Etc. All the students of the final year (final year) of the courses, all the medical / paramedical and other undergraduate courses (technical and non-technical all) will be physically educated from 11/01/2021 and on-line study in other classes. Resolved to continue. Resolution of the aforesaid reference (1) is to examine the possibilities of starting classroom (physical education) for the final year students of the college by following the SOP issued by the Government of India to the students of each year of the college just like the classroom (physical education). : A meeting was organized on 9/01/2071 under the chairmanship of Commissioner, Health and Family Welfare. At the end of the detailed discussion, the committee has given an opinion to the first year students of the colleges to start classroom (physical) education.
Click Below Links To Download Circular
University. Matter of re-opening colleges.pdf
According to the aforesaid opinion of the committee, the matter of starting classroom (physical) education for the first year students was under active consideration of the Government. Resolution: At the end of the adult deliberation by the Government, it is decided that for the first year courses of the college, the academic work of the colleges will have to be started physically from 05/09/2021. . In colleges, seating arrangement of students should be arranged in Zig-Zag / Staggered Marrier by following Safe Social Distance between two students. 3. All Samaras Hostels which were earlier converted as Coid-19 and Asymptomatic Coud-19 Decimat Center, but with a significant reduction in the positive cases of Coid-19, Samaras Hostel is now almost empty. And to comply with the guidelines outlined in reference (ii) for hostel re-opening. Y, Academic-Non-Academic Staff and Students of the Institute of Higher Education and S.O.P. Will have to follow. Pay, this resolution will apply to all government / private universities under the Department of Education as well as government / non-government aided / private colleges. . This resolution is issued on the parallel file of the department as per the permission received from the Government dated 01/06/2021, 119 dall.
Tags: Education News
Newer Post Older Post Home
WhatsApp Free Join Broadcast List