Home News / GOOD Decision / If you plan a wedding in Gujarat now, it is mandatory to do this work

GOOD Decision / If you plan a wedding in Gujarat now, it is mandatory to do this work

Decision / If you plan a wedding in Gujarat now, it is mandatory to do this work, the state government has issued a notification. 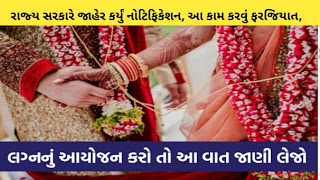 In Gujarat, online approval has to be sought for weddings. The organizer has to apply online on the portal. The state Home Department has issued a notification. Online registration has been decided due to Corona's status in the state. The state government has created an online software called Organizing Marriage Function.O
The state government has decided to conduct online registration for weddings in the state. The state Home Department has issued a circular on marriage occasions. According to which, in events like weddings, receptions, open spaces or closed spaces, not more than 50 per cent of the capacity of the venue but a maximum of 100 persons will be allowed to organize the event.
You have to apply online on the portal for the wedding or ceremony. Separate software has been developed for registration of wedding occasions. Registration has to be done at www.digitalgujarat.gov.in.
VTV News Report gujarati : Click Hare
After making this application the organizer has to keep with the slip. If the police or officer wants, the planner has to keep it with the slip. No more than 50 percent of the capacity of the venue can be called. 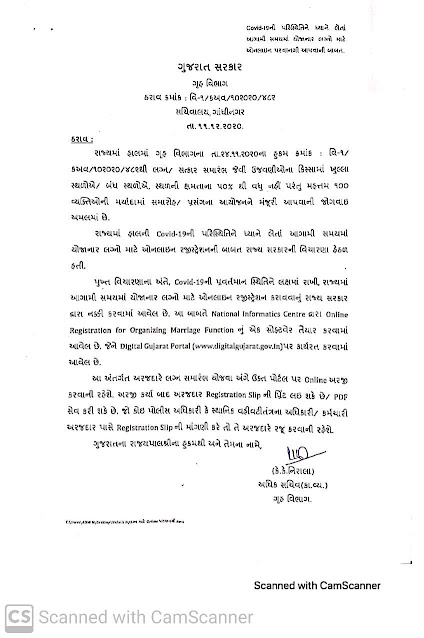 State Government's Uterus regarding approval for marriage
It may be mentioned here that while the corona virus has spread in Gujarat, on the other hand, the wedding season is in full swing. But police approval is not required. However now the government has taken the uterus. Online approval has been made mandatory for any wedding or reception.
Tags: News
Newer Post Older Post Home
WhatsApp Free Join Broadcast List