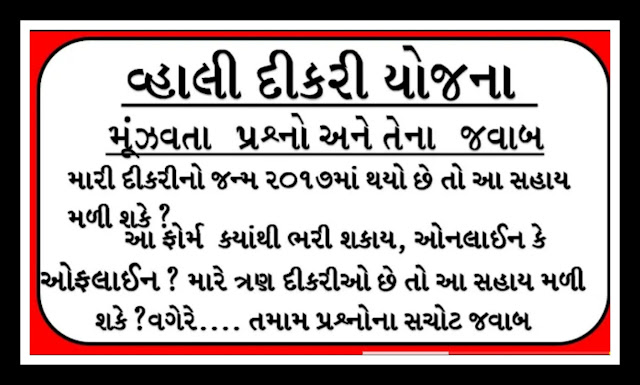 And if more efforts have been made to do both after this, the state government has launched a 2019 budget in the state budget. The state-wide campaign has been launched to increase the birth of girls and to enhance their education. At the bottom of giving up the female education of murder and strengthening the position of sociologists at the bottom Making the implementation of the wise are loved daughters down by the state government in order to achieve that objective

The aim of the Government of : Gujarat vahali dikri yojna
Increasing the birthrate of daughters
Reduce the out-of-proportion ratio in girls' education
Empowering women in the society
Prevent Childhood
Eligibility of the student under the guardianship scheme
Daughters born on or after 2/8/2019, benefit of this scheme...
A maximum of two daughters of the couple and the benefits of the scheme will be attainable
Both the couple's first and second daughter's benefits will be attainable, but the couple should have the mother's offspring operation after the second marriage....
If the first daughter and second daughter are available, then the second daughter will be able to get help but after the second daughter the couple...
In the case of giving the first couple and the second daughter together or more together, in all cases, the benefit of the parents' daughter plan is available but after the daughter...
Friends You will also find information about this circular tat recruitment 2019 on Google's big websites such as currentgujarat marugujart, Gujarat Rojgar, ojas.gujarat.gov, www.govtjobbuzz, gnankutir.com and news papers. And soon and you will also find anil official ad by searching google
Eligible benefits to be reaped in the guardianship scheme
Vahali Dikri Yojana 2019
1-The first installment#Rupees 4000 will be available to the daughters upon admission to the first standard
2- The second installment#Upon admission in the ninth standard, assistance of Rs 6000
3- Last installment#At the age of 18, one lakh rupees is available as education marriage support but the daughter is married...
Financial Provision Guardianship DICTIONARY FINANCIAL PROVISION Halo Yes Speak Yes Speak YesThe new head budget will have to be opened for the scheme, until the new head is opened, the guardian daughter scheme has a provision of four percent for the total dissemination and dissemination of the plan....
Order Demand 106
2235 - Social Security and Welfare
02 - Social welfare
03 - Welfare of women
04 - Financial assistance to destitute widows for their rehabilitation
Provision of diffusion diffusion
Up to four percent of the annual total financial provision of the scheme may be spent for dissemination under the Wali Dikri Yojana.
As required under the guardianship scheme
1- Mother's age is 6 or more at birth of daughter...
2 - In order to avail benefits under the Guardian Daughter Scheme, the combined annual income limit of the couple's spouse will be equal to 200000 and below in rural and urban areas. In the case of income limit, the beneficiary's birth will have to be taken into account in relation to the year ending on March 31...
vahali dikri yojna When to fill out the form and how to fill it
The beneficiary couple will have to submit the rule sample and the application online along with the required supporting evidence. The application can also be submitted to the Public Service Center, Seva Setu.
The CDPO will have to send 15 to the woman and the child officer with their own opinion, after making the necessary test to drink the ladder to which the woman and child officer and according to the rules, will have to approve the application for fifteen days.
Applicants will have to submit the following supporting evidence along with the approval of this schemea 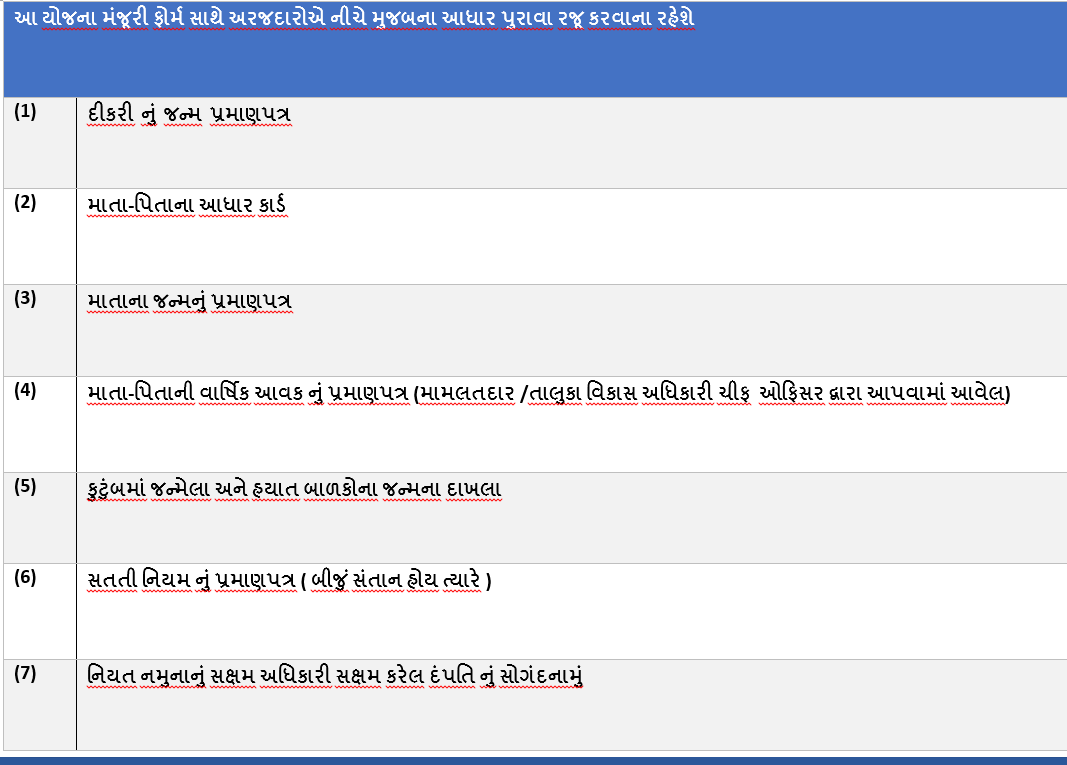