Home News / Big news / government has canceled 3 crore ration cards due to this reason, is it yours?

Big news / government has canceled 3 crore ration cards due to this reason, is it yours? 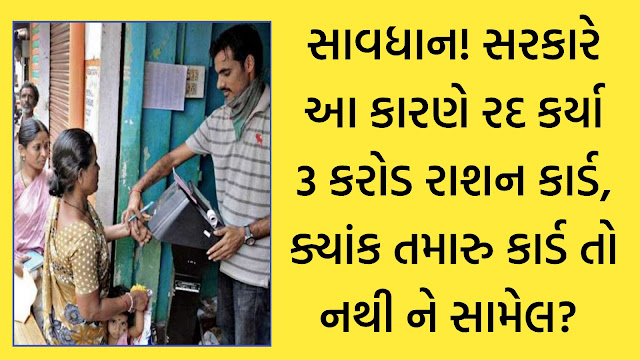 Union Minister Ramvilas Paswan has said that during the digitization of ration cards and Aadhaar seeding, 3 crore ration cards were found fake, which have been canceled.
Let us tell you that the government has decided to distribute one kg of pulses free to each ration card holder for three months till June under the Pradhan Mantri Garib Yojana (PMGAY) for the poor during the lockdown period.
Why Canceled Ration Card - A statement issued by the government said that Aadhaar and ration card linking is necessary. That is why ration cards are canceled. Apart from this, food and other goods were being taken free of cost by the government's scheme by creating fake ration cards.
These ration cards have also been canceled.During digitization of ration cards and Aadhaar seeding, 3 crore ration cards were found to be fake, which have been canceled. I have directed the Secretary, Department of Food and Public Distribution in this regard to find out whether new cards have been issued in place of canceled ration cards. 4/6 @narendramodiA total of 80 crore people in the country have ration cards.
This initiative is largely considered to be important for the welfare of many migrant beneficiaries such as laborers, daily laborers, blue-collar workers, etc., who frequently change their place of residence in search of employment across the country.What to do now- Once the ration card is canceled, you will have to go to the Food Supply Department to get its information.
Show your ration card and Aadhaar card there. Aadhaar number will be linked to ration card. After this, your new ration card will be created. The old will not be released.The new scheme is starting from June 1 - Tell you that the government will implement the 'One Nation, One Ration Card' scheme from June 1, 2020.
Important Link:↙️
Read This News Report In Gujarati
Through this, old and new ration card holders will be able to buy ration anywhere from any ration shop in the country. Union Consumer Affairs, Food and Public Distribution Minister Ram Vilas Paswan has announced this recently. This is being called ration card portability
Tags: News
Newer Post Older Post Home
WhatsApp Free Join Broadcast List